Amason, 48, is a Norman resident and has 25 years in law enforcement. He served as a first line supervisor lieutenant in several areas before being promoted to captain and taking on a command level position.

“The Cleveland County Sheriff’s Office (CCSO) has been on a positive trajectory in the last two or three years, and I can bring forward-thinking leadership to the office to continue that trend,” Amason said. “I have told supporters I will commit the next decade to making sure we have the best Sheriff’s Office in the state if I am honored to serve as the next Cleveland County Sheriff,” he added.

“Following in the footsteps of popular leadership always presents a challenge, but it also presents an opportunity. CCSO already has a great team of emerging leaders and innovative thinkers. It’s important that we build on that current success and leave a lasting legacy,” Amason said.

Amason joined the Norman Police Department (NPD) in July of 2000 and is currently assigned to the Support Bureau as an Investigations Commander in charge of supervising the Criminal Investigations Section, the Special Investigation Section, the Crime Lab and Property/Custody.  He has been a certified peace officer in the State of Oklahoma since 1993.

Amason earned his bachelor’s degree in Criminal Justice and Administration at Mid-America Christian University and holds an Advanced Law Enforcement CLEET certification. He has completed the IACP Leadership in Law Enforcement course and is a graduate of the DEA’s Drug Unit Commander Academy in Quantico, Virginia.

Amason has participated in NPD’s pistol, SWAT and bike teams, as well as being named to the Governor’s 20 which recognizes the top 20 law enforcement shooters in the state.

He started his law enforcement career with the Warr Acres Police Department from November of 1992 until July of 1998 where he was one of the first responders to the bombing of the Alfred P. Murrah Federal Building.

Amason’s wife, Amber, owns a local professional photography business. They have two children at home: Baylor, 12, and Beckem, 2. Amson’s oldest son, Reagan, graduated from Norman North and is a sophomore pre-med student at OU. The Amasons are active members of Timbercreek Fellowship in Norman.

Authorized and Paid for by Chris Amason for Sheriff 2020 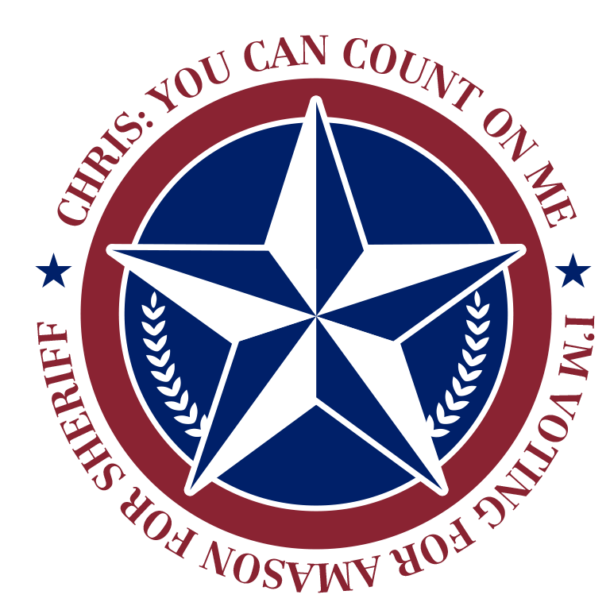 You Can Count on Me!

I'm voting for Amason for Sheriff!

You have Successfully Subscribed!